According to two new studies released at the SC Aerospace Conference & Expo, South Carolina’s aerospace industry continues to drive economic growth.  An economic impact study released by the South Carolina Council on Competitiveness shows that the impact of aerospace on South Carolina’s economy has grown to $19 billion, an increase of $2 billion since last measured in 2014.
The second study released at the conference, the 2016 Southeast Manufacturing Study, was conducted during May and June 2016. Alabama, Florida, Georgia, North Carolina, and South Carolina participated.  Aviation Week invited more than 300 companies to participate; 13 percent did so across five states.   Respondents to the survey in South Carolina indicated that they would grow their workforce by 31% by year-end 2017. 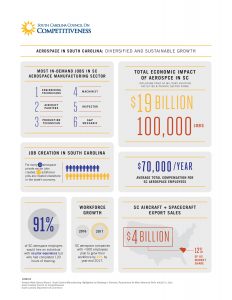